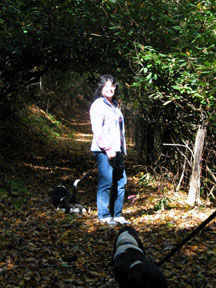 Dear Anne had the worst and the best of it.  She came to help us move in October.  We were living on camping gear, had plans to simply work at moving but the truck arrived five days late.  So Anne helped us put away, neat up and supervise the influx of Virginia relatives who in the nick of time, fixed up our run-in shed and the tool shed in time for winter.

Later, Sharon and Elizabeth arrived for a few days.  Elizabeth is one of those folks who can't sit still, so she spent some considerable time helping me can this and that and also did some temporary repairs on our tumbledown mansion.

And we took the Cass Railroad.  Doesn't this shot remind you of a Degas?  My girlfriend said they would have to be in the buff to qualify as Degas
They went wading in the Greenbrier River
Sharon and Elizabeth walked our path with Tippy and Roger.

Bill and Ginny visited and guess what? We took the train. They also brought their horses and rode the Greenbrier River Trail with us. There is a lot more to do here in WV than ride the Cass Railroad, but so far we have not tired of it. 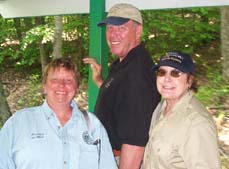 Next is something on a more bittersweet note

We missed the train by minutes once but simply reversed the order and did our tourist shopping first and got another train later that day. We had a great time.  On another day, Russ got to ride Cyla's mule, Fester, on the Greenbrier  River Trail. That was Russ's first time on a mule and Fester was a decent mule, to a point. Then he got his own mind going. The ride was fun but a mule can tell when there is a beginner aboard. Of course, Fester does take care of beginners and does not let anyone get hurt while riding him.  It is just that Fester has conversations about which way and how far to go.

In April Barbara and Cled Jones and their two grandsons, Mathew and David came for all too short a visit. We did Beartown, Cranberry Glades, the River, shooting, throwing pots and general WV relaxin'. Cled particularly liked our afternoon break time, Barbara and especially Matt turned a good pot while David turned out to be a deadeye with the pistol. They say we were the highlight of their American trip. I can't quite believe that we stood up to the competition from NYC and Hollywood, but they all want to come back.

Carol and Hank were here for a full glorious week. We picked them up at the Greenbrier Valley Airport and whisked them off to a mountian party with friends, food and music. And an outhouse amenity. Good sports the whole week, they went hiking with our mountain buddies, had venison soup, visited metropolitan Marlinton and its museum and feed store as well as dined at French's Rest. And more. Click on the thumbnail photos to enlarge.