The house needed considerable renovation for us to live comfortably.  Here are some before and after pictures although there were more projects than the ones pictured. We installed a new heating system to replace wood fired one in the basement which could not come near to heating the whole house as we shivered through that first December. There are now three gas heaters. Clyde loves them all. 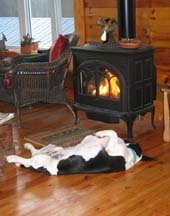 Here is a list of a few of our other projects:

Now on to the pictures

Of course, the old kitchen area ( now sliders ) and moved stairs were not the only projects. Here is an idea as to where the kitchen went, where the stairs came from and more openings in walls.